The essence of the well-being of Trinidad and Tobago’s citizenry is enshrined in these five sectors of society. They also take the crucial role of defining the benchmark of quality for a nation’s infrastructure and as such, they reflect the country’s overall proficiencies.

The sector continues to be driven by Ministry of Health and the allocation of just over 10% of the 2019 budget (TT$5.695B). Despite this investment, there is still a shortfall in staff, particularly amongst specialist doctors, resulting in the local health sector suffering from the almost ubiquitous strain experienced by global public health services.

Facility-wise, the nation is adequately covered geographically in relation to each island’s size:

The private healthcare sector continues to expand in Trinidad, comprising a total of 10 private hospitals and institutions. A large number of insurers offer private health insurance that covers the majority of the expenses in most medical cases.

Despite the aforementioned shortage of specialists, private hospitals are currently able to provide 90% of the required procedures without the need of flying in foreign doctors.

Opportunities that have been identified by the sector include:

Trinidad and Tobago’s industrialised history has meant a particularly high standard of safety compliance that has emanated from the energy sector and trickled down to other industries.

The continued presence of multinational companies (MNCs) over decades of energy production set the tone of safety standards and has imbedded it into the organisational culture of local companies along the energy chain.

By extension, any entity that interacts with these multinationals (or their local offspring) also has to adhere to these global standards. Indeed, Trinidad and Tobago’s impressive decades-long energy sector safety record is confirmation of the high level of its safety practices.

Safety as a whole for other sectors of society took a giant leap forward with the passing of the updated Occupational Safety and Health Act 2006.

OSHA has been given the teeth of prosecution to aid in their mission and has been successful in raising the standards across the nation. Excellent safety means excellent management of the entire process from inspection to approval; OSHA is armed and experienced in both.

This sector has been severely tested in 2018, as has been the trend in preceding years, impacted by the worsening Venezuelan crisis and the resulting migration of their nationals to Trinidad and Tobago. This – in addition to the ongoing internal nationwide battle between local gangs, together with incidents of piracy on the regional seas – has stretched the armed forces to their limit.

However, important steps have been enacted to confront both internal and external security issues. Namely:

The appointment of Griffith, the first permanent Commissioner since 2012, created an immediate upsurge in confidence amongst the population and injected vigour into the Police Force. Statistics may not yet show the extent of said improvement, but high-profile narcotic busts coupled with a marked increase in detection rates, do indicate that improvements have been made in this crucial sector. Citizens now await continued improvements to ascertain whether the appointments can buck the trend and be deemed a success.

Regionally, Trinidad and Tobago’s Prime Minister Dr. the Honourable Keith Rowley, the current head of CARICOM’s security committee, reiterated Trinidad and Tobago’s perspective to combat the growing issues for the country and the Caribbean as a whole, “Our regional security framework is the mechanism through which greater collaboration among the regional security forces and institutions will operate, in our efforts to combat transnational crime and other security threats.”

Admittedly, Trinidad and Tobago has been slow in creating and implementing meaningful green policies and thereby initiating the necessary culture shift to lift the standard of care for the environment. Tasked with the job, the Environmental Management Authority (EMA) – the State Board responsible for every relevant topic from noise levels during Carnival, to helping ensure the readiness of the Disaster Preparedness Programme – has stepped up its stated intentions, guided by Government policy outlined in the most recent budget, which pinpointed the mission of strengthening the following areas: 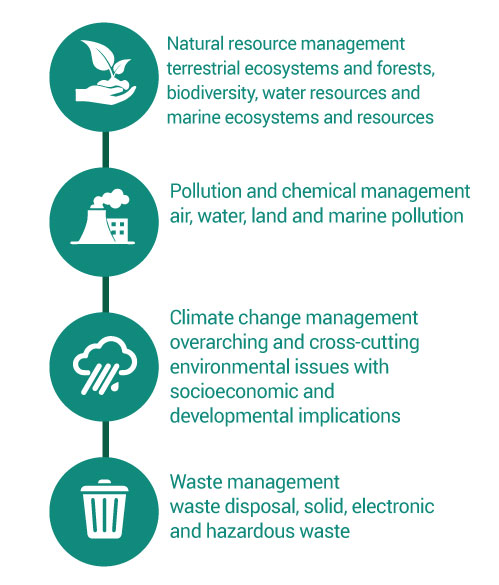 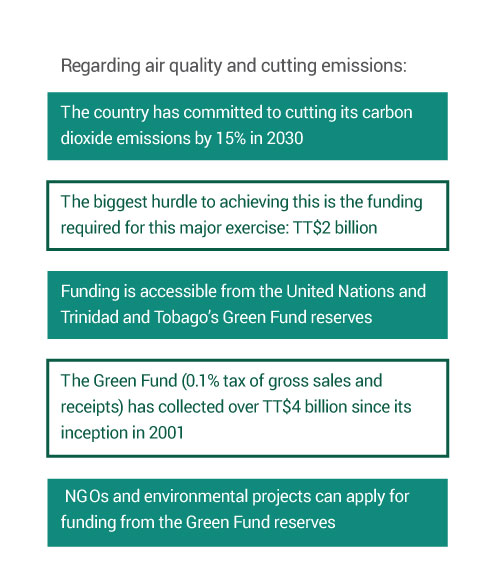 These mandates are very much in their infancy. As a guide to Trinidad and Tobago’s current stance on environmental issues, its citizens are still not required by law to recycle or to separate their waste prior to collection, as has been implemented in other countries.

Recycling was initially reduced in the past year, with uncertainty over the ability of the main provider of these services, Plastikeep, to service the nation. The announcement in February 2019 that the EMA will take over the service, under the name iCare, was a welcome one, together with the pledge to enhance Plastikeep’s collection of household plastic, glass, and aluminium waste. Currently, there are 85 iCare collection points across Trinidad and Tobago.

Trinidad and Tobago has signed up to a number of global conventions and protocols, including Kyoto, Stockholm, Basel and the recent Paris agreement. Enforcement of its policies is carried out by special reserve officers that comprise the Environmental Police Unit, established in 1999.

Within the private sector, companies have begun to champion environmental issues. For example, supermarkets now charging for the use of plastic bags have raised awareness while creating the needed culture shift. NGOs too, have taken up the role of educator on the matter, such as Environment Tobago’s partnership with the Department of Forestry, to make future generations aware of the need to respect and protect the environment.

Of all the sectors listed in this article, the environment requires the most work to raise its standards, though the mantra of ‘low-hanging fruit’ makes quick change possible if implemented properly. The biggest challenge remains the security sector, with health’s hurdles also to be overcome if they are to attain or supersede the standard of Trinidad and Tobago safety sector.

View Companies Related to Health, Safety, Security, Environment and Standards - Who's Who
×