News headlines such as “Will Guyana Soon Be the Richest Country in the World?”, “US, China Trade War Deepens as Beijing Retaliates with Higher Tariffs” and “Brexit: UK and EU Agree Delay to 31 October” featured during the year 2019. Such headlines justify the 2019 theme of the World Trade Organisation’s Public Forum, which is “Trading Forward: Adapting to a Changing World Domestically”.

Domestically, local businesses continue to adapt to the changes in the global economy, as evidenced below. Using Constant (2012) prices, the manufacturing sector experienced growth in 2018 (see Table 1). It is anticipated that this sector would continue along its positive trajectory, resulting in increased employment and foreign exchange earnings.

Source: Ministry of Finance’s Review of the Economy 2018

Developments in the sector were the result of initiatives by companies with support from the Government. Some of the successful initiatives are identified below:

ANSA Coatings Limited – exported its first shipment to Cuba in March 2019. One of Trinidad and Tobago’s manufacturers of paints, the shipment was valued in excess of €500,000.00.

Creamery Novelties – established in May 2018, the company began exporting to the CARICOM market within seven months. A manufacturer of ice cream and ice cream cones, the company is also seeking to export to Latin America.

Domus Windows and Doors Limited– the company officially opened its factory doors in February 2019. During the opening speech, the CEO indicated that Trinidad and Tobago was selected as the destination for the plant based on an analysis among several CARICOM markets.

The aforementioned successes can be repeated by other firms as long as there is an environment that is conducive for positive results. To create this environment, the private sector and the Government are addressing several issues:

Coupled with the achievements are the challenges which inhibit business. One notable challenge is the restricted access to foreign exchange.

In response to the need for increased value and volume of exports, manufacturers have engaged in market diversification. Thus, in addition to CARICOM, companies continue to explore non-traditional, extra-regional destinations. Several manufacturers have attended trade missions that were targeted to markets such as Colombia, Costa Rica and Panama. These trade missions provided local manufacturers with the opportunity to understand the respective export market, to meet with potential distributors, and to secure deals.

In conjunction with the market diversification efforts from manufacturers is the Government’s provision of a facility for access to foreign exchange via the EXIMBank Forex Facility. This USD 100,000,000 facility is dedicated to manufacturers so that the access to foreign exchange woes can be mitigated.As at January 2019, the World Bank has projected that Latin America and the Caribbean would experience GDP growth (see Figure 2). Such growth provides opportunities for local businesses as the purchasing power of the citizens in these economies will increase. Thus, companies should exploit Trinidad and Tobago’s geographical position vis-à-vis the remainder of Latin America and the Caribbean by boosting its exports to these neighbouring markets. 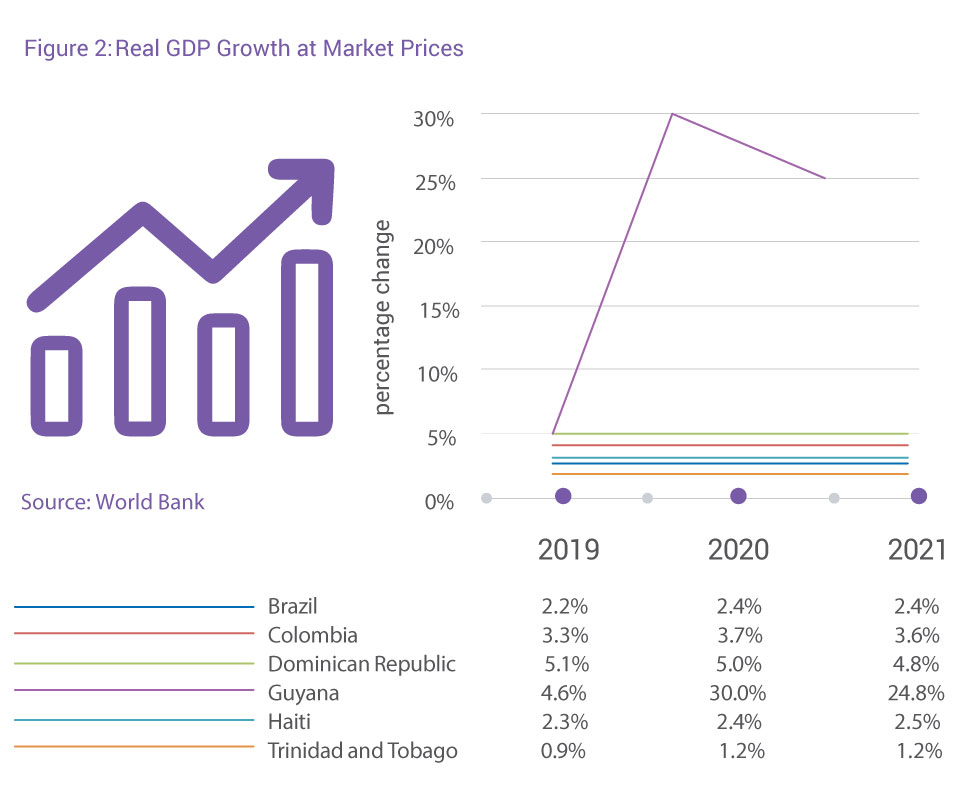 In all aspects of life, change is the only constant. Local businesses recognise this fact and are embracing the changes that are occurring. It is envisaged that Trinidad and Tobago’s economy will continue to grow as long as companies quickly adapt to these changes.