Co-founder of the Internet and Google Vice-President, Vint Cerf, to speak at TTCIC Annual Business Meeting 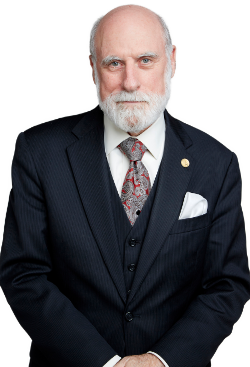 The topic “Imagine that…!” will look at life and business in a future technology driven environment.

Vinton G. Cerf, Vice President and Chief Internet Evangelist at Google will be the guest speaker at the Trinidad and Tobago Chamber of Industry and Commerce’s Annual Business Meeting on 26th April. Themed “Imagine that..!”, Mr. Cerf will give strategic insight to the audience by discussing the possibilities of full connectivity on our planet and what is required of Trinidad and Tobago to engage in the opportunities ahead.

Vint Cerf is considered the co-founder of the TCP/IP protocols and the architecture of the internet, along with Robert Kahn. He has served in executive positions at ICANN (Internet Corporation for Assigned Names and Numbers), the Internet Society, MCI Inc., the Corporation for National Research Initiatives and the Defense Advanced Research Projects Agency. Among the many awards he has received is the Presidential Medal of Freedom, the United States’ highest award to civilians, which was bestowed in 1997. Vint is an internationally renowned speaker on trends in digitization and in driving imagination into what lies ahead in a world in which lives and business are driven by technology.

Charles Pashley, President of the Chamber notes, “We are honoured to have this prestigious guest speaker join us at our first Signature Event for the year. The world of imagination was once viewed as being incompatible with business, but people like Vint have been exploding that myth in his global engagements. In fact, technology is driving a new wave of imaginative innovators in every sector. We too can free our minds to the possibilities that technology offers to businesses. It is time to re-imagine our tomorrow and re-shape our future. We at the Chamber believe that this conference, ‘Imagine that…!’ is about giving you that tool.”

Vinton G. Cerf is vice president and Chief Internet Evangelist for Google. He is the co-designer of the TCP/IP protocols and the architecture of the Internet. He has served in executive positions at ICANN, the Internet Society, MCI, the Corporation for National Research Initiatives and the Defense Advanced Research Projects Agency. A former Stanford Professor and former member of the US National Science Board, he is also the past President of the Association for Computing Machinery and serves in advisory capacities at NIST, DOE, NSF and NASA. He earned his B.S. in mathematics at Stanford and M.S. and Ph.D. degrees in computer science at Stanford. He is a member of both the US National Academies of Science and Engineering. Cerf is a recipient of numerous awards for his work, including the US Presidential Medal of Freedom, US National Medal of Technology, the Queen Elizabeth Prize for Engineering, the Prince of Asturias Award, the Tunisian National Medal of Science, the Japan Prize, the Charles Stark Draper award, the ACM Turing Award, the Marconi Prize, the Legion d’Honneur and the Franklin Medal. He is a Foreign Member of the British Royal Society and Swedish Academy of Engineering and holds 29 honorary degrees. He is a member of the Worshipful Company of Information Technologists and the Worshipful Company of Stationers.