Showrunner Chosen for FilmTT’s On Set

Trinidad and Tobago Film Industry Company Limited (FilmTT) held a 2-day retreat that included capacity development and networking engagements and ended with the Showrunner Pitch. The retreat and pitch were part of the Writers’ Room phase of the On Set edition of FilmTT’s Script to Screen Programme which began in 2021. Of the 5 pitches, one was selected to be made into a sitcom by a panel of judges led by TTT Limited. The Writers’ Room will comprise of all 5 writers who will rewrite the script under the guidance of the Executive Producers and the winning Showrunner, Richard Ragoobarsingh. The first episode is expected to air in September, 2022. (Photo top: Richard Ragoobarsingh)

Day 2 concluded with the Showrunner Pitch. The 5 writers pitched their sitcom idea before a panel of judges for the chance to be the Showrunner. The competition was fierce as all the presenters brought their best. However, there could be only one Showrunner: Richard Ragoobarsingh.

“What an experience! There was a lot of creative energy in so many writers’ concepts and as the process moved from stage to stage you became more and more invested in the vision, in the opportunity. I am so looking forward to working with the other extremely talented writers in the Writers’ Room in bringing this project to life. Thank you FilmTT, TTT and ExporTT for the opportunity and support in making this happen!” – Richard Ragoobarsingh. 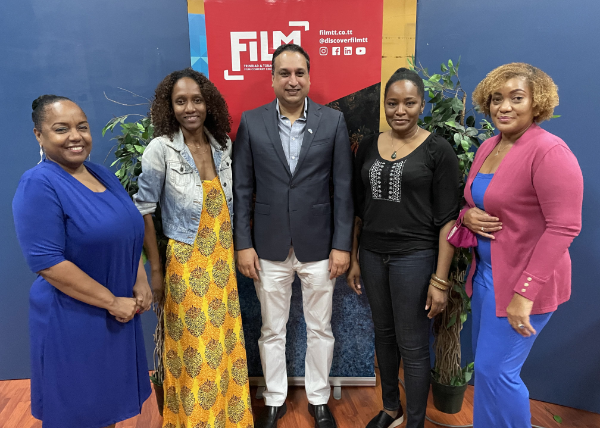 “We’re so excited that each person that presented here is so full of talent, ideas and energy. Regardless of who was selected, they are all going to be a part of this creating of a sitcom that will air on TTT and will also be a part of coordinating, with exporTT, to distribute internationally. There is so much talent in Trinidad and Tobago and it’s great to be involved in this opportunity. So much talent in the room. Thank you FilmTT.”   – Diane Robertson – Televisions Programming Manager, TTT Limited.

“All the presenters had a passion for national development and dealing with tough issues. Also, everyone had export potential right at the top of their mind, even at the start of the process, which is very commendable. And I am happy that all of them are winners because they are going to be part of the Writers’ Room. I want to commend FilmTT for an excellent job in moving this nation’s talent forward.” –  Navin Dookeran – CEO, EximBank.

For more information on the On Set edition of the Business of Film: Script to Screen Programme, visit www.filmtt.co.tt/onset.

About the Trinidad and Tobago Film Company Limited (FilmTT)

The Trinidad & Tobago Film Company Limited is a national agency established in 2006 to facilitate the development of the film industry in Trinidad and Tobago. As a subsidiary of the Trinidad and Tobago Creative Industries Company Limited (CreativeTT), FilmTT provides logistical support and film commission services such as location scouting and research and acts as a liaison with industry partners, the community, production houses and Government agencies. For more information, please visit www.filmtt.co.tt

About the Trinidad and Tobago Creative Industries Company Limited (CreativeTT)

The Trinidad and Tobago Creative Industries Company Limited (CreativeTT) is a wholly owned State enterprise established by The Government of the Republic of Trinidad and Tobago through the Ministry of Trade and Industry. CreativeTT’s mandate is ‘to stimulate and facilitate the business development and export activities of the Creative Industries in Trinidad and Tobago to generate national wealth’ and, as such, the company is responsible for the strategic and business development of the three (3) niche areas and subsectors under its purview- Film, Fashion and Music. For further information, please visit www.creativett.co.tt