The 2019 Trinidad & Tobago National Culinary Team, comprised entirely of currently-enrolled students of the Trinidad and Tobago Hospitality and Tourism Institute (TTHTI), stood head and shoulders with the Caribbean’s best culinary and bartending professionals from thirteen (13) other destinations at the Caribbean Hotel & Tourism Association’s (CHTA’s) Taste of the Caribbean competition.

Led by Team Captain Jeremy Lovell of the Courtyard by Marriott (Port of Spain), the five (5) student-members of the National Culinary Team 2019 represented T&T strongly at the CHTA’s ‘Caribbean305’ event held on June 22nd at Mana Wynwood. Team Trinidad & Tobago’s mouth-watering offerings of geera pork, curried chicken, pholourie (with a range of sauces), and a ‘mango chow’ cocktail, were all in demand by patrons from both the Caribbean diaspora and residents of Southern Florida.

For the Team of the Year competition dinner held on June 23rd, the student-team executed a scrumptious and balanced three (3) course dinner offering that creatively infused many of Trinidad & Tobago’s local flavours and spices, much to the appreciation of the judges and patrons alike.

Trinidad & Tobago won a Silver medal in the Team of the Year competition, bested only by two (2) Caribbean National Teams: Cayman Islands and Barbados, who received Gold medals.

In the Junior Chef competition, Jodi Eversley, produced an exceptional offering which earned her a well-deserved Gold medal whilst in the Pastry Chef competition, Keenan Lezama’s dessert offering, packed with indigenous T&T flavours, earned him a Bronze medal.

In the Bartender competition, young Isaiah Trumpet, represented Trinidad & Tobago and delivered strong performances across all four (4) categories: Non-Alcoholic cocktail, Vodka cocktail, Rum cocktail, and Mystery Bar. Due to his age (19), he was restricted from tasting any of his cocktails during the entire competition based on US law. Notwithstanding, Isaiah won the Gold medal in the Best Non-Alcoholic cocktail and a Silver medal for his overall Bartender performance. 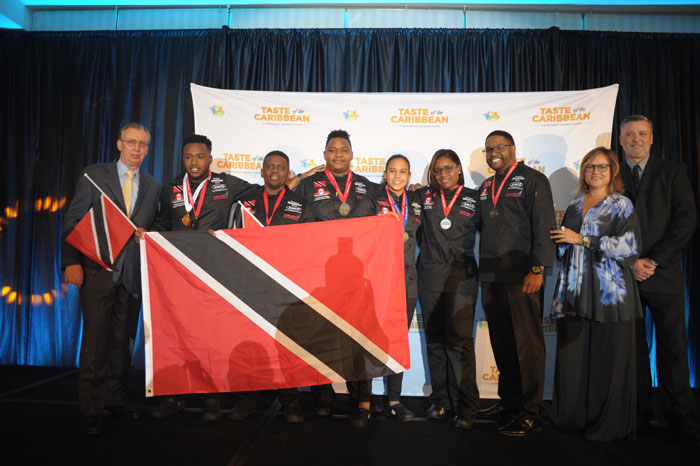 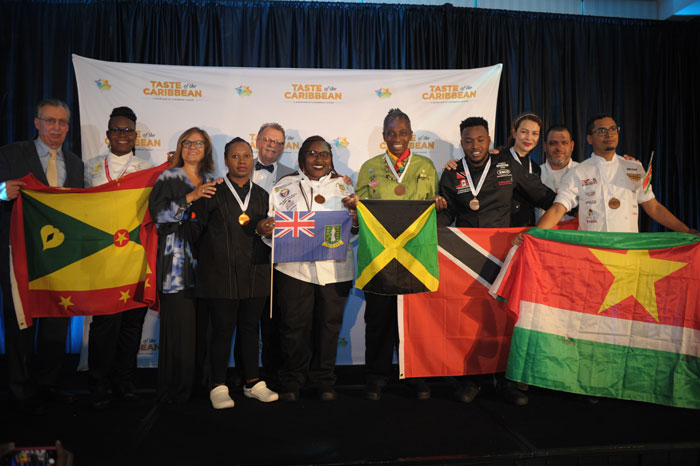 Overall, at Taste of the Caribbean 2019, Trinidad & Tobago’s first, all-student team earned five (5) medals, including: 2 Gold, 2 Silver, and 1 Bronze medal, which they all received at the Competition Award Ceremony held last evening at Hyatt Regency Miami.

The THRTA has been fielding national culinary teams to Taste of the Caribbean competition since 1997 and through the support from its key partners in the public and private sectors, Trinidad & Tobago has achieved culinary leadership in the Caribbean with over 103 medals and numerous titles earned over the past fifteen (15) appearances, including Caribbean National Team of the Year for an unprecedented seven (7) times!

The THRTA recognizes the pivotal role that its hospitality training institute, the Trinidad & Tobago Hospitality & Tourism Institute (TTHTI) continues to play in achieving these successes.

The bold decision this year to have an all-student National Culinary Team represent Trinidad & Tobago against seasoned Caribbean professionals is a testament to high standard and quality of skills-training that TTHTI offers its students and their remarkable results speak volumes.

The THRTA and the TTHTI remain committed to the development of Trinidad & Tobago’s youth by providing them with a regional platform and relevant opportunities to expand their culinary and bartending skills.

The THRTA wishes to acknowledge the generous support of our valued partners and investors who made Trinidad & Tobago’s appearance at the 2019 Taste of the Caribbean competition possible:

The THRTA also thank the hundreds of patrons who attended our Practice Dinner Series over April to June 2019 as well as the families who provided the time, support, and encouragement to all of the National Culinary team members.

FilmTT thrilled to announce the launch of Hot Ones – Caribbean