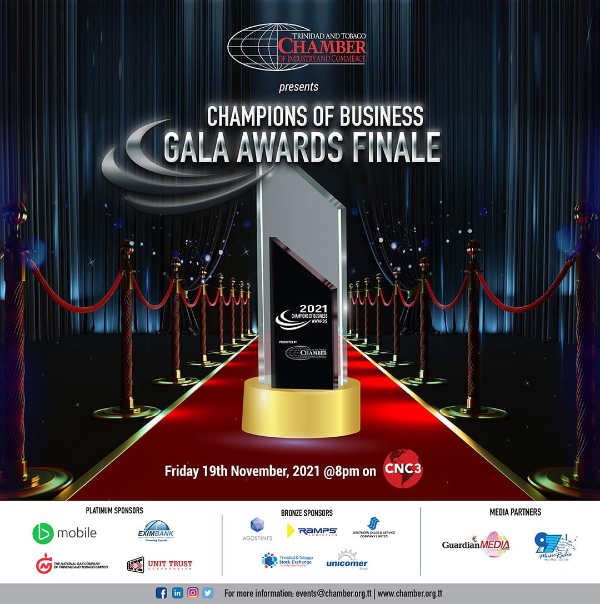 The countdown is on for the Trinidad and Tobago Chamber of Industry and Commerce’s annual Champions of Business Awards, which has become one of the most anticipated events on the business community’s calendar. This year the gala event will air as a televised broadcast and simultaneously live streamed on CNC3 TV on November 19, 2021 beginning at 8:00 p.m.

Champions of Business was first introduced in 2005 as the Business Hall of Fame. It was conceptualised to recognise and honour outstanding and exemplary achievement in the sphere of business, highlighting the role of Trinidad and Tobago’s business community in the country’s national development. In 2014, having grown exponentially, the event was re-branded, with the Champions of Business introducing additional categories of award while retaining the Hall of Fame as a category.

In 2021, the Awards comprise of six categories, and while some of the recipients have been made known beforehand, others will only be announced when the program airs tomorrow. The broadcast will include videos of the inspiring stories that made all of the following Champions of Business:

The Business Hall of Fame (Platinum category sponsor The National Gas Company of Trinidad and Tobago Limited). The following will be inducted:

• Award recipient to be announced

• Award recipient to be announced

Entrepreneurship (Platinum category sponsor The Trinidad and Tobago Unit Trust Corporation). One of the following finalists will receive the award:

Business Technology (Platinum category sponsor bmobile). One of the following will receive the award: