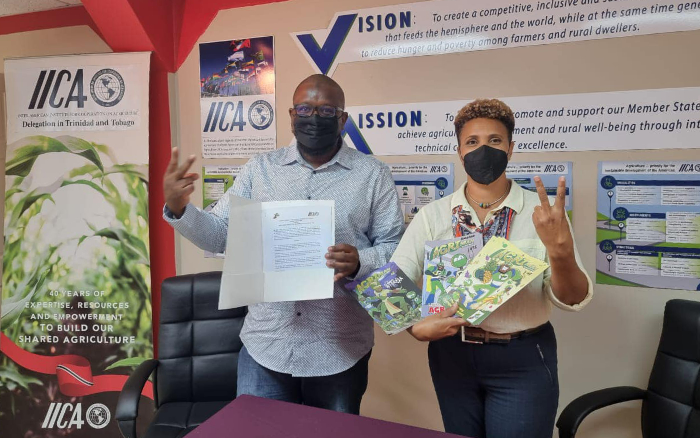 WHYFARM’s Founder and Executive Director; Mr Alpha Sennon, met with Ms. Diana Francis, representative of IICA Trinidad and Tobago Deligation, to sign a Memorandum of Understanding between the two organizations.

IICA and WHYFarm have undertaken joint actions since the inception and WHYFarm for the benefit of common stakeholders. The two organizations recognize the existence of areas of common interest, in which joint work can contribute both to achieving their own objectives and to strengthening cooperation with other organizations in contributing to the socio-economic development of Trinidad and Tobago and the Caribbean Region respectively, through agriculture and rural development.

The areas of cooperation covered by this Agreement shall be those that contribute to the achievement of the following objectives:

a) Community and Collective Food Garden Establishment and Management

Ms Francis said that IICA has engaged with WHYFarm from its start-up in late 2015, as a young civil society organisation, led by young but progressive leaders with a vision.

IICA, which has supported agricultural and rural development in T&T since 1978, recognized that WHYFarm’s vision was reflected in, and synced with IICA’s.

Formalizing this relationship through a GTCA will provide a much stronger basis for working together in areas of common interest and capacity and will also extend the reach of development action and confidence among shared stakeholders that we are both working towards a shared purpose, with a commitment that allows us to share respective resources with the ultimate beneficiary being our stakeholders.

We thank IICA for this collaboration that would bring about positive change in the AGRI Sector across the region. IICA has supported us from day 1 and invested in AGRIman at the very beginning.

At WHYFARM we believe in Colaboration not competition, complementing not reinventing.

We say Thank you IICA.

WHYFARM is at IICA Delegation In Trinidad and Tobago